I've had this floating around on my machine for a couple of months, figured I should actually get around to posting a version of it. This is a simple .NET 2.0 winforms app that allows you to visually explorer the relationships in your salesforce.com schema. 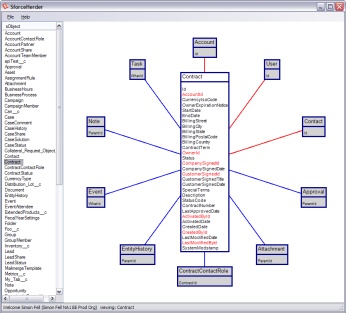 Source and binaries are included in the download (I built it with Visual C# 2005 Express), and is released under a BSD license. the layout code could use some improvement on the views with lots of entities (not to overlap them), and the entity under inspection could be improved to show the details of the field types etc. I got frustrated with all the math needed to do the layout which is why I stopped working on it. I wonder if re-doing the UI portion in Avalon would make it any easier ?. One of the more interesting things it does is to use the async api provided by .NET to pre fetch the describes of the related objects in the background, so the UI should feel pretty snappy, it also takes advantage of the fact that .NET can support gzipped responses, so it turns that feature on as well.